Sincerity
Enclosed coutyards are hidden in the intersection of the axis of the building. The space is without any human imaginary and idols 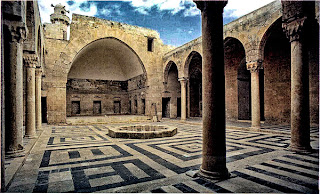 Knowledge
In the prayer hall, above the mihrab, insciptions are lit up by the illuminating effects of sunlight. This is the architecture of light as an expression. 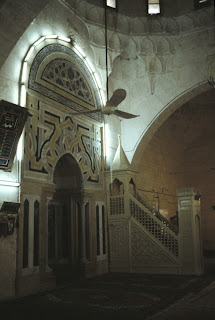 Balance
There is a balance in the proportions of the plan of al-Firdaws. 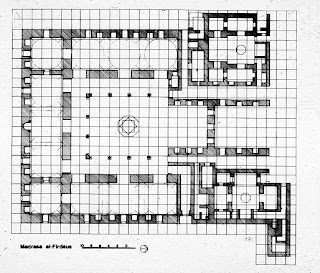 Posted by Jeanette at 03:27 No comments:

Introduction
-Ayyub ( Saladin's father) lent his name to their dynasty
- Kurdish origin, founded by Saladin and centered in Egypt
- A period of vigorously strengthening Sunni Muslim dominance in the region by constructing numerous madrasas in the major cites.
-The Ayyubids ushered in an era of economic prosperity in the lands they ruled
- Resurgence in intellectual activity in the Islamic world.

Historical Events
1) Saladin sent to Egypt, aided Shirkuh in a power struggle against Shawar
2) Shirkuh took over but died 2 months later
3) Saladin took over from Shirkuh as vizier of Egypt and eventually the sultan.
4) death of Nur-ud Din (Saladin's mentor) took over control of northern Syria
5) Battle of Hattin - for Jerusaleum against Crusaders
6) Won over Jerusaleum, crusaders keep fighting for the Holy Land
7) Saladin dies in 1193

The Ayyubid architecture style was mainly  military architecture, due to the invasion from the Christians crusaders.
The characteristics that can be seen are :
1) FORTIFICATIONS - learnt from the crusaders to build curtain walls which follow the natural topography of the site.
2) MACHICOLATIONS & ROUND TOWERS - machincolations are floor openings between the supporting corbels of a battlement, through which stones, or other objects, could be dropped on attackers at the base of a defensive wall.
3) CONCENTRIC PLANNING

Posted by Jeanette at 01:09 No comments:

Definition
1. Mamluks is Arabic designation for “owned slaves”.
2. Domination:
-  Throne was passed through by murder or usurpation, not inheritance
- Every reign of Sultan rarely lasted more than 6 years.
3. Conclusion:  Architecture flourished and new forms evolved.

- Year of built: 1356- 1363
- Complex contain: Friday mosque, a madrasa & domed mausoleum
- Major monument in Islamic World
- Largest mosque in Cairo, allow to accommodate 400 students
- Location: former palace, made it necessary to build an enourmous and magnificient structure
- Building:
-Tall, towering 113 feet above the street
- Dome collapsed in 1661
- Originally has 2 minarets, only one stands today. Another one collapsed in 1659.
- Portal: remarkable due to it is largest in Cairo. 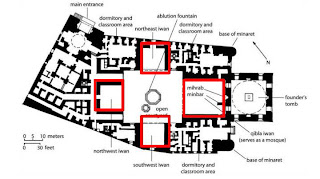 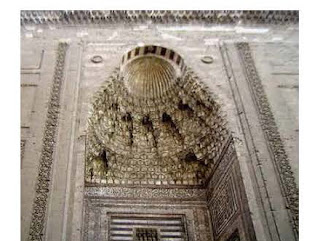 Remembrance: Inscriptions at dome- rhythmic precision and expression in remembrance to God 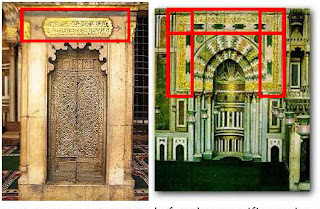 Respect: Mosque gateway or entryway greet before by magnificent size of central courtyard and prayer hall.

Plan and image of The Khanqah and Mausoleum of Sultan Faraj Ibn Barquq
- First Circassian ruler.
- Building contained: Similar to Mosque of Sultan Hassan, has madrasa teaching the  4 rites, Friday mosque and mausoleum.
Different with Mosque of Sultan Hassa: Also a khanqah for Sufis.
Accomodation: 125 students and 60 Sufis

Sultan Qaytbay (1468-1496)
- Devote to the construction of religious institution. This was the time of consolidation of idea and practices rather than a time of innovation.
- Able to develop and practice new architecture style: Focus on stone carving and the refinement of proportion. 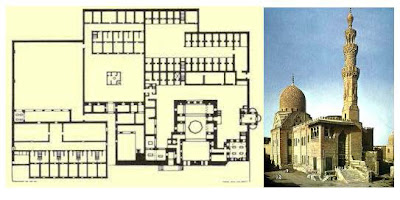 Plan and image of The funerary & religious complex of Sultan Ashraf Qaitbay.

- Includes 4 iwans in the madrasa, cells for students, a tomb, a sabil (public drinking fountain), and a boy’s primary school.


This week we separate our work so each of us focus on different period and do the introduction of the history and figure out the architecture style. There's 6 period for Egyptian architecture time which is

Under Ahmad ibn Tulun(governer of Egypt who soon took control of the country's finances and the conquered Syria), Egypt began to liberate itself under the rule of the Abbasid, and thus began a new era, The Tulunid Dynasty. However, this dynasty only last for a few generations, after which Egypt was once again ruled by the Abbasid.
Architectural style
The structure system consists of large brick piers and arches, also utilizing decorated bricks and carved, moled stacco. The Umayyad's rectangular plan was still maintained. The architecture in this era started to focus mainly on huge architectural scale.

Founded by Abd Allah, the Fatimids consisted of Shia Muslims who discovered that they were descendants of the late Fatima, daughter of the Propher Muhammad and wife of Ali, the fourth caliph. Consequently this lead the founder to believe that it was his right to lead the Muslim world than the Abbasids. He assumed the title of caliph, and conquered Egypt in 969 A.D. and founded Cairo in 973 A.D.
In 1711 A.D., they succumbed to the armies of the Ayyubid Salah al-Din (Saladin)

Architectural style
They started to build facade decorations with recesses attached with windows are
Stucco, wood, and stone carvings together with door grills started to display floral designs and geometric motifs.
Hypostyle plan for mosque remained, an in addition arcades were built around courtyards.
Keel arches were also introduced.

Began after Salah al-Din took over the Franks and Fatimids in 1171. This dynasty was a muslim dynasty of Kurdish origin. They spent the next decade on conquests throughout the region, and by 1183, they occupied Egypt, Syria, Northern Mesopotamia, Hejaz, Yemen and North Africa. After the Battle of Hattin in 1187, most of the Kingdom of Jerusalem was under their control. The Ayyubids ushered in an era of economic prosperity in the lands they ruled and the facilities and patronage provided by the Ayyubids led to the resurgence in intellectual activity in the Islamic world. The Ayyubid’s also constructed multiple madrasas strengthening the Sunni Muslim dominance.

Architectural Style
Military architecture was the supreme expression of the Ayyubid dynasty. The most obvious change that occurred was the fortification of the Cairo and al-Fustat within one city wall. Waterworks were also introduced to the city, thus it expanded to streets and quarters, where they were provided with fountains and baths. The greatest achievement was the building of the Citadel of Damascus and Bosra in Syria. The extramural developments on inne

The Mamluks were the slave military elite who succeeded the Ayyubids as the rulers of Egypt and Syria. Mamluks appropriated many aspects of the architecture of their predecessors, the Fatimids and the Ayyubids. Elements like keel-shaped niches and the use of muqarnas to decorate the hoods of arched portals and niches, appear on the carefully composed monumental façades of Cairo, the Mamluk capital in Egypt.

Mamluk buildings are characterized by the high quality of their masonry work, by their monumental size, and by their carefully composed façades. From the street the buildings presented the viewer with views of tall domes, often with incredibly elaborate carved surfaces, slender minarets poised above expanses of plain masonry ornamented with inscription bands, tall pointed-arch windows, and enormous arched portals with muqarnas hoods. Interiors boasted rich ornamental programs composed of multicolored stone revetments, mosaics, and carved wood.
Mamluk architectural patronage was lavished on foundations that combined religious, funerary, educational, and other functions into multifunctional charitable complexes. In Cairo's cemeteries, and especially in the former Fatimid palace quarter known as the Bayn al-Qasrayn, ("between the two palaces")


During these period, Egypt was branched out into twenty-four sector and each of it had its own Mamluk bey which previously known as an emir under the Ottomans. The beys were governed by the sultan in Istanbul. The slaves that lives in around the Mamluk beys had to pay taxes and also had baronial authority. Besides, the turks also had to be paid by the tributes as well. Sultan Selim, the Ottoman baron liked to beget uproar between the Mamluk beys that he could keep them divided and authorized. Thus, they always kept assaulting among themselves. The dominator who was on the top, was known, Sheikh al Balad, which means ''Controller of the country''.

Having a heavy influence from the Byzantine tradition, which to be precise the influence of the Hagia Sophia during the Classical Ottoman architecture. The architectural style is definitely had a blend of numerous influences and adaptation for Ottoman needs. Sinan, the architect who designed most of the structures during this period, for instance, the design of the classical mosques had a similar touch as Hagia Sophia which both used a dome-based structure. Moreover, it also changed the proportions, structure interior had opened and freed it from the colonnades other structural elements that gapped out the inside of Hagia Sophia and other Byzantine churches. In addition, it also added more light to come into the facade, which led to emphasizing on the use of lighting and shadow with a large volume of windows.
Posted by KERLOOTEOW at 06:50 No comments: